Everyone is talking about how bad the flu season is this year in 2020, as bad as or worse than flu season 2017. U.S. News called it “an especially lethal season” for children. Time Magazine wrote that we still have months of the disease ahead of us. And CNN said we’re on track for one of the worst flu seasons in decades.

It’s true that this is a particularly bad flu season, as the CDC reports that flu activity has been higher for the past 10 weeks. Especially devastating has been the rise of Influenza B cases, a strain of the flu that is more dangerous for children and young adults.

Given the seriousness of flu season 2020, what exactly can you do to keep yourself and your loved ones healthy? Here is Honeybee’s guide to specific actions to take.

On average, only 34% to 56% of adult Americans get the flu shot each year. Prevention is still the best medicine. Due to the increasing severity of flu seasons each year, everyone aged 6 months and older should get the vaccine.

However, anyone who fits the following categories especially needs to get the shot. You are considered high risk for the flu if you are:

If you haven’t gotten your flu shot yet, it’s not too late! While getting the vaccine before October is ideal, it’s still better late than never.

It’s true that the vaccine isn’t perfect, as scientists have to make an educated guess each year on what strains the vaccine needs to cover. However, even if the shot doesn’t prevent the flu entirely for you, it will at the very least shorten the duration and severity of the infection if you get sick.

And no—the shot itself will not get you sick. If someone gets sick shortly after receiving the shot, they most likely already had the virus or a lowered immune system.

Step 2: Prevent the spread of bacteria and germs

There are some easy steps you can take to help prevent both yourself and others from getting sick.

How to avoid getting sick

The first step should always be to get the flu shot, as I mentioned above. However, you should also take these preventative measures:

If you have been in contact with someone who has the flu, you can get a prescription from your doctor for a medicine that can help prevent you from getting it too. This antiviral medicine is called Tamiflu, and it’s most commonly prescribed in its generic form, Oseltamivir. It is completely safe to use just as a preventative measure.

It is taken once daily for 10 days, ideally with a light snack, full meal, or milk to avoid the side effects of nausea and vomiting. Tamiflu costs under $50, even without insurance.

How to avoid getting others sick

If you are sick with the flu, help prevent it from spreading to others.

Step 3: Reduce the length of your flu

If you have just started to notice symptoms, you can also ask your doctor for Tamiflu (Oseltamivir). If you start it within 2 days of noticing flu symptoms, then it can help  shorten the length of your flu and avoid serious complications. However, it does not replace the vaccine!

Oseltamivir (Tamiflu) also comes in liquid forms, so it’s easy for children to take. When used for children and adults, it’s taken twice daily for 5 days. It can be used for anyone 2 weeks and older.

If your symptoms do not go away, get worse, or if you develop new symptoms, go see your primary care doctor. It’s possible that you have some other illness either in addition to or instead of the flu.

Additionally, if you are pregnant or nursing, it might be especially important to take Tamiflu because you are at a higher risk of developing more serious symptoms or complications from the flu.

Sometimes, it can be hard to tell the difference between a flu and a cold. Here is a handy infographic from the CDC to help you figure it out: 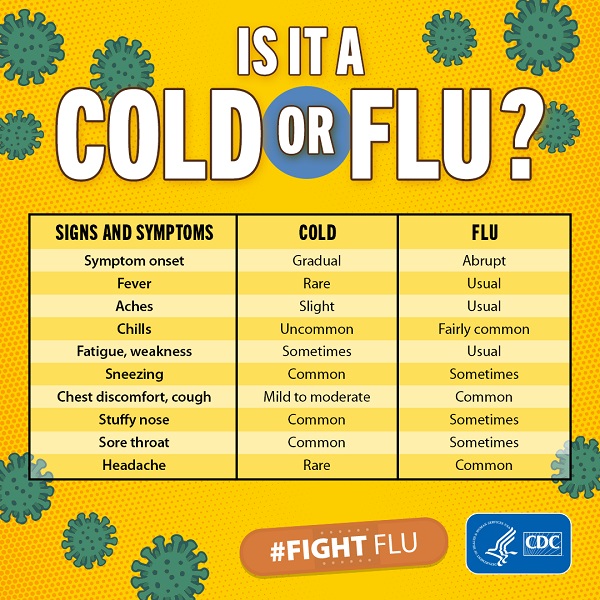 If you suspect you have the flu, go to the doctor as soon as possible so that you can start Tamiflu (Oseltamivir).

If you want to know even more, you can also closely monitor the progress of the flu. There are 3 major signs used to track flu activity in the United States, thanks to the U.S. Virologic Surveillance.

Clinical Labs test the percentage of respiratory specimens that test positive for influenza at clinical laboratories. In the week of January 6th, positive specimens went from 23.6% to 22.9%. So even though they went down, they are still high overall.

Data from Public Health laboratories monitor the proportion of circulating viruses that belong to each influenza subtype/lineage. In the week of January 6th, there were almost equal amounts of Influenza A and B.

Virus Characterization is used to help figure out how similar the current type of influenza virus that is going around is to the reference viruses that are used to make new flu vaccines. They are also used to monitor how the flu virus changes within the current flu season.

You can learn more here.

BONUS: Keep up to date on new strains of the flu and major viruses

At the end of 2019, the CDC reported a new virus called the coronavirus. This virus originated in a Chinese town called Wuhan, in the Hubei Province of China. It has since spread to other countries, including the United States, Australia, France, and Germany.

Scientists are actively working on understanding the coronavirus, and information is still developing. For now, you should take the same precautions you would to prevent the flu. Additionally, avoid all travel to China.